I wish I could make more spinning/ slider type cards but alas, Canada got rid of pennies back in 2013. I have a very small stash of pennies left. Occasionally, I’ll have a relative come from the U.S. and they’re nice enough to give me their change ^^”…

For my last card in my interactive card set I wanted to do a spinning/slider card. I thought it would be fun if the sheep was jumping over fences. 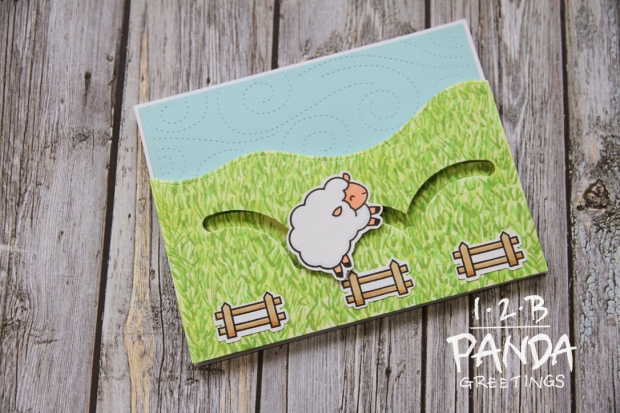 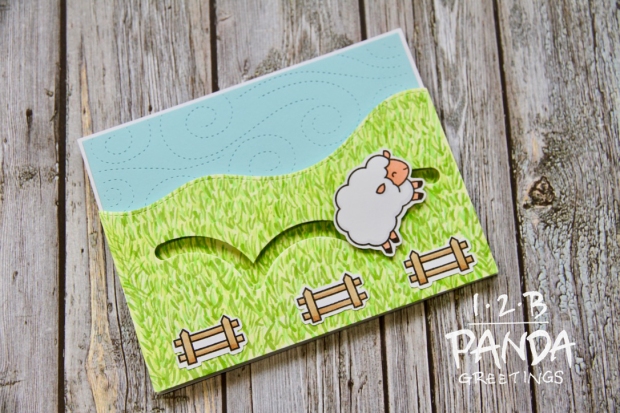 This card is relatively simple compared to my other cards. I’m really loving Lawn Fawn’s Stitched Windy Backdrop so I used it again for this card. I also die cut out some rolling hills with Lawn Fawn’s Stitched Hillside Borders. I cut the slider channel with Lawn Fawn’s new Slide On Over Semicircles and die cut them several times and in a way that they were all connected so it looked like the sheep was jumping over those fences.

The sheep and fences are from Lawn Fawn’s Hay There stamp set. I used the following Copic colours on my card:

I didn’t like the look of a sentiment on the front so I decided to do the inside of this card. I die cut Lawn Fawn’s Happy Birthday Border. I trimmed off, ‘you’, and trimmed both sides so they were equal. Then I heat embossed “EWE” with the letters from Owen’s ABC’s with Nuvo Classic Gold Detail Embossing Powder and cut the letters out with their coordinating dies. I also stamped and cut out an extra sheep for the inside.

You can check it out in action below:

If you missed my other 2 cards in my card set you can find links to them below:

If you want to join in on the challenge, you can check it out here.

Thanks for stopping by!!